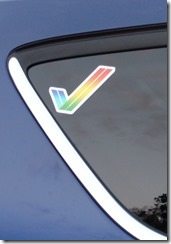 Back in the 80s and 90s my computing platform of choice was the Amiga, a feisty platform that offered lightweight realtime preemptive multitasking for a really good price. Along the way it established itself as the premiere platform for video and graphics, going so far as to become the platform that authored the graphics for the TV series “Babylon 5”.

Back then it was possible to be passionate about operating systems and computer vendors, as apposed to today’s excercise in choosing one shade of mediocrity over another.

My sweetie recently aquired for me the sticker you see above, the famous Amiga rainbow checkmark.  I fly this flag with pride, but also with regret.

Commodore and the Amiga suffered from mediocre management that managed to destroy the legacy of an extraordinary team of developers. That is my regret. That today we are met with a choice between two or three flavors of library paste and for some reason people manage to generate loyalty for one over the other.  Not me. I know what we lost.

What we lost is for the chance to see a better computing world. Even if you’re a Mac Head, your OS would have been better by virtue of having some actual competition. AmigaDOS alive and well and on its own would have pushed everyone to do better.

So I fly this particular geek flag in rememberance if the world that could have been rather than the world that was. Because we had hope, and fire, and ambition, and passion. And it was betrayed by a bunch of guys in the Caymans.